I distinctly remember watching this year’s Apple event and being interested in absolutely nothing new. The yearly even that temps me into spending massive sums of money didn’t come across as well as usual. Most of the improvements were software anyway. Despite my bank balance thanking me, I felt a bit flat that I wouldn’t be picking up my usually iPhone and Apple Watch combination ready for my birthday in a couple of weeks time.

How wrong could I have been. Just a couple of months later, I am sat typing this out with an iPhone 14 Pro in my pocket and the most surprising hit of the year, an Apple Watch Ultra on my wrist. Whilst I like the iPhone, I would give it up with very little thought if I had too, however no one is taking this watch away from me now, and that shouldn’t be the case.

All of the Apple marketing tells me this watch is not for people like me. Sure I am relatively fit, despite health issues stopping me from running much, and I do like the outdoors. This watch is supposed to be for those that are levels above me. Divers, rock climbers, ultra distance runners, it’s not supposed to be for full-time dads and office workers, but here we are. All the improvements are just as useful in everyday life as they are for those Apple aim it at, and I adore it.

That’s it, review over. There are enough people out there that will walk you through specs and all the things that it can do, unfortunately I lack the ability to express the boring bits well and answer those types of questions you may have. What I can do though is tell you why and how this helps me in my daily life and hopefully help you see where it could be useful to you. This is pretty easy because there are not many areas that make a difference, but they add up to something that most people should consider. 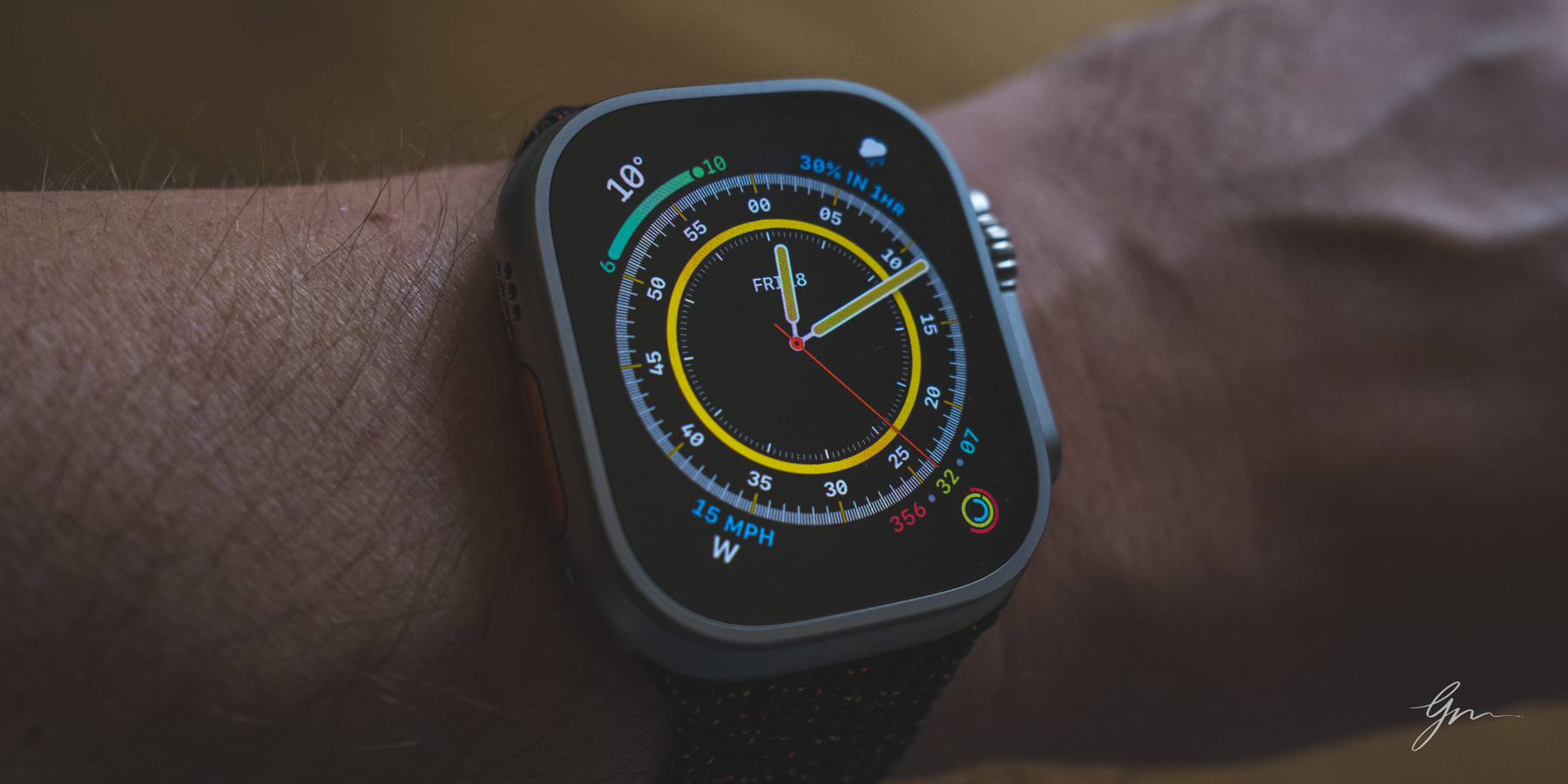 Presentations and marketing never give a true reflection of the type of usage you will get from Apple devices. They are pretty spot on, but no-one does the things they highlight. They don’t watch video playback on a MacBook Pro for 18 hours straight, and most people won’t be doing 60 hours worth of exercise (low-power mode required). It’s even hard to work out what battery life would actually be like when comparing to the ‘regular’ Apple Watches “all day” but the Ultra will easily see you through three days.

I loose around 25% per 24 hours, including sleep tracking and at least one workout. Although occasionally, it seems to plummet at twice that rate until I reboot, which is bound to be something software related. Is this the best battery life on the market, no. Is this anything compared to a Garmin watch for example, no again. It is the best Battery life in an Apple Watch to date, and this means less to worry about.

The only ‘downside’ is that charging takes quite a while. Using a supported fast charger, it can get you from 25% ish up to 50+ in 30 mins, but it takes a while to top it up to full. I have mediated this by charging it most days for 30 minutes or so while I have a shower and get sorted for the day. This sees the battery life hover around 80-50% constantly and suits me much better than having to charge it for 90-minutes or so every few days.

I am over the moon with the improvements to battery life of the Apple Watch Ultra. I wear it constantly, use if for phone free days out, and in my testing when I was trying to see how far it would get me I only lost 12% after 5 hours of hard use. If you’re like me and want to be contactable, still be able to make payments and other modern things, but don’t want a phone around all the time, the Apple Watch Ultra is the perfect device. 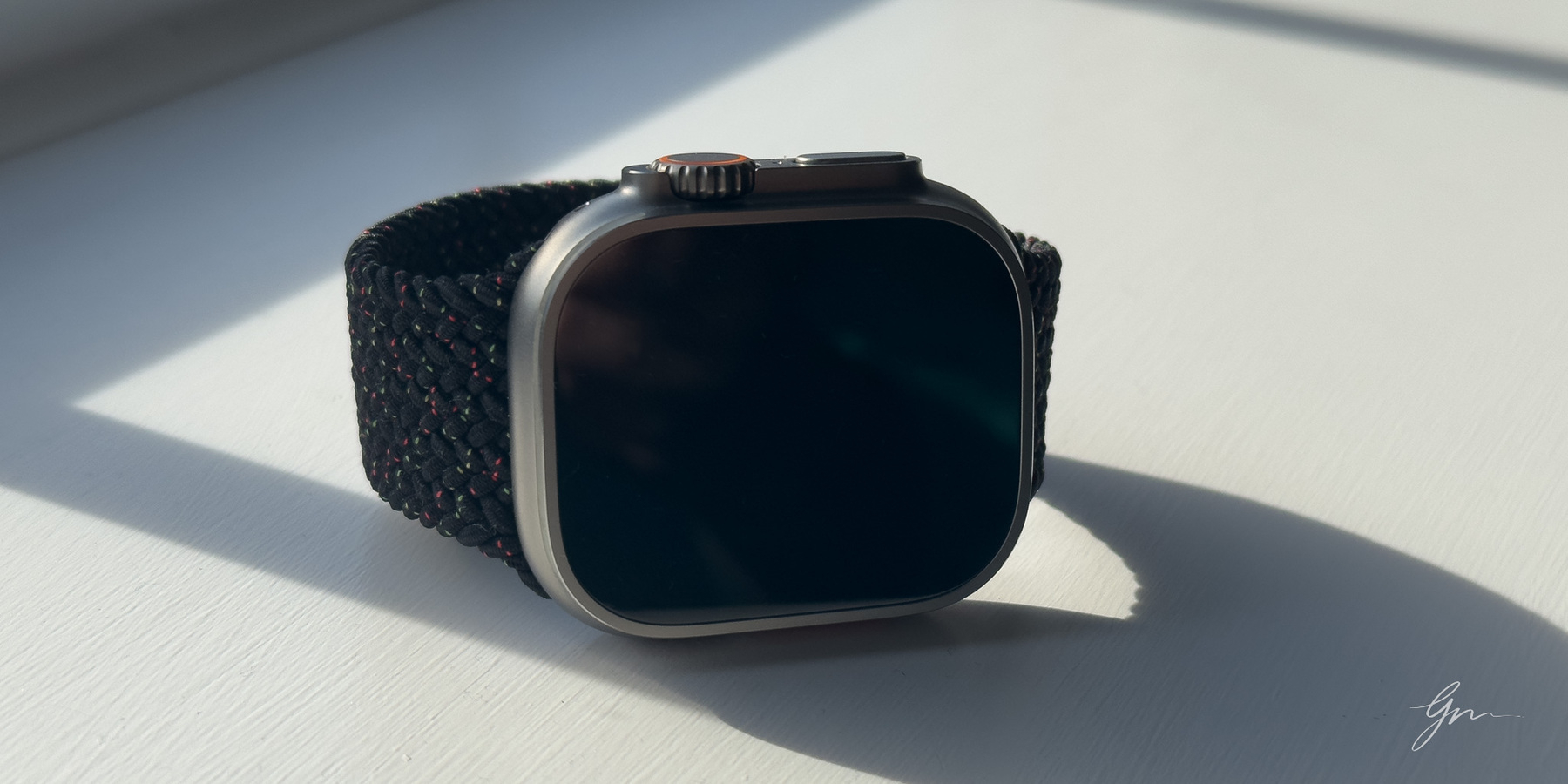 When I first thought about getting the Apple Watch Ultra was when people I knew began to receive them and use them. Sure, I’d seen the glossy images in press reviews and seen a few in video reviews, but once they were all over social media my opinions changed. The design that I thought was chunky and horrible, actually looked much better ‘in-person’. When compared to larger Casio watches the Apple Watch Ultra looks much nicer, to me at least.

Of course, this is all subjective. You may look at the raised lip to the flat screen, coupled with the crown guard, and think yuck. Some of my desire was just motivation to have something else, anything else, than the Apple Watch I had been wearing for years, but the Ultra version looks really impressive and feels great on my wrist. Even my tiny wrists. Seriously, I have to buy Size 6 braided loops and a S/M in the Orange Alpine Strap as seen in almost all press shots (it is nice though).

The great thing about the new design is that it doesn’t scream smartwatch. It’s obvious that it is one if you’re paying attention, but from everyday life, to the boardroom, the design looks more like a watch than the original design. The chunky design is not for everyone, and in fact more stylish watch brands are going the offsite way and slimming down, but it looks much better than the press photos would have you believe.

The weird thing about this watch is, despite the increase in size, and it is a big watch, it’s far more comfortable than other versions. The heart rate sensor doesn’t seem to push itself into my wrist as much, and the increased width makes the straps pull around my wrist rather than down. With the increased battery life, I tried sleeping in it, which I rarely did with the old one, and was surprised how comfortable it is.

Watch straps are a bit looser when compared with the regular ones, which makes perfect sense given that the watch itself is slightly bigger. This is only obvious with fixed length bands like my favourite braided loops.

I have lost count the number of times I have accidentally scraped my watch on a wall, or knocked it on a door frame. Accidents happen in real life and although my sport versions always stood up OK, they always end their time with me with more than a few scrapes and chips. This new titanium version with the robust design gives me the confidence that I don’t have to worry about it. This is one of the great appeals of this watch, yes it can stand up to mountain climbing or whatever, but it will also resist being hit by a ‘ toy or fumbling it off its charger in the dark. It’s outdoor proof and also life proof. 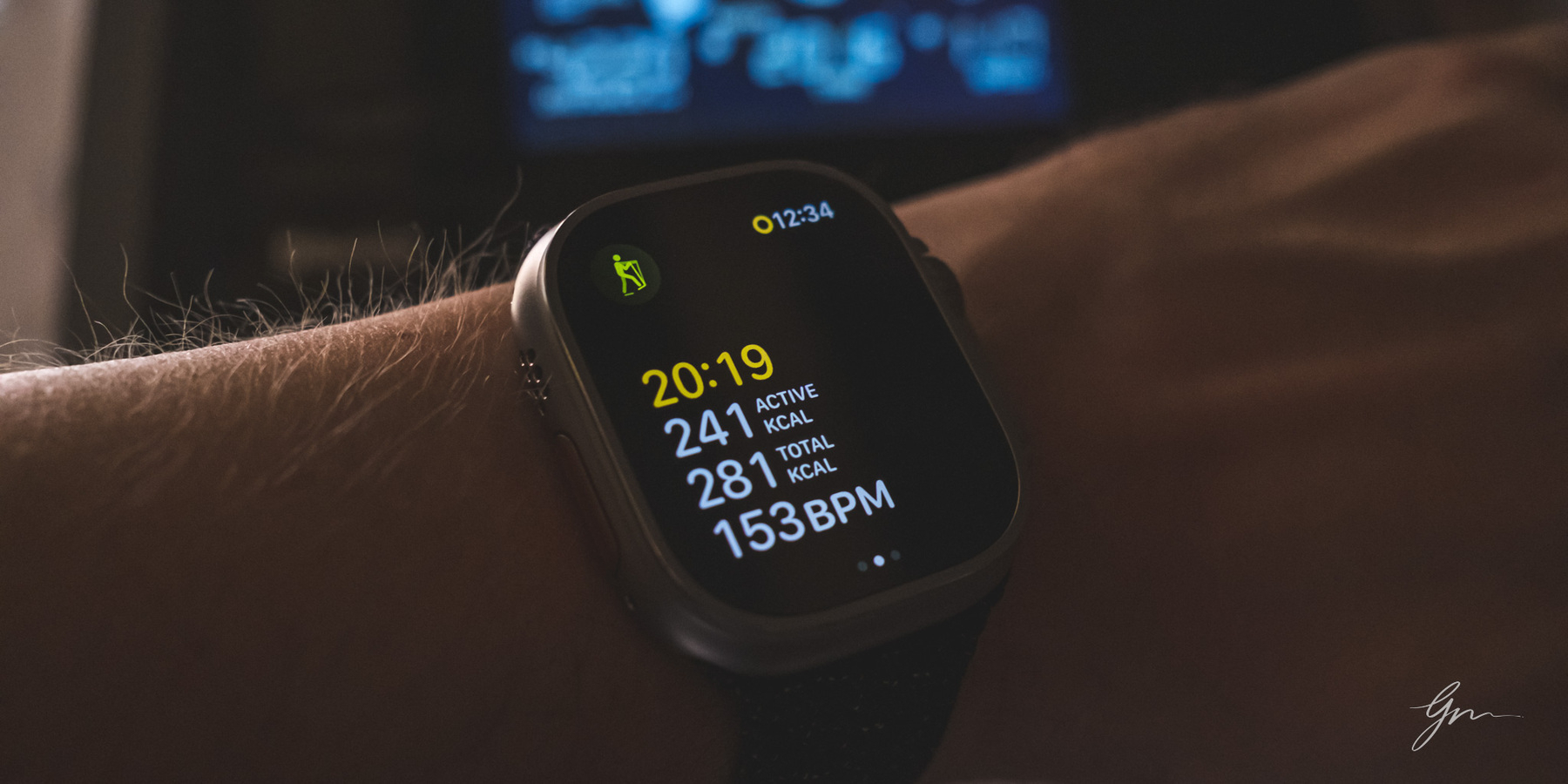 Many of the design changes are due to fitting in a much larger screen. I suppose 49 mm is not that much of a difference from 45, but that’s almost a 10% bump up. The new watchOS 9 exaggerates this further because the OS feels much larger than before, making interaction with the screen much easier. From swiping on the keyboard replying to a message to opening and using a app, it really is surprising what a difference a few mm make on a watch screen.

The screen is also much brighter when in use. This isn’t something that I noticed when using older versions, only when testing both side by side you do notice the stark difference. Making the screen much easier to see and use, especially when working out, when a quick glance is all you need to see all information on the nice big screen.

The screen is not the only thing that’s been improved, sure you’ll also get more accurate GPS and a depth sensor, but a massive improvement is the onboard speaker. Making it even more useful in daily life if, like me, you get phone calls at the worst possible time. I’m not saying people on the other end can’t tell they are on speaker, but you can hear them load and clear now whatever you are doing. When phone free, I’ve been making and receiving quite a few calls and the speaker makes a nice change to having to carry around my AirPods just in case.

All of these things make the Apple Watch Ultra one of the best buys of the last few years. The battery life and small improvements all around have made me think less about it being a smartwatch, and more of a life assistant. I have the confidence it will do whatever I need it to do, whenever I need it. I can go phone free for hours on end as well as stand up to all the stresses and strains of my hectic lifestyle. It comes with me everywhere and I absolute love it.

That’s not to say that everyone should rush out and buy it. This is a £850 watch, after all. It won’t retain the value like spending the same money on a regular watch would do, and it won’t last nearly as long. However, it can aid your life in some very specific ways that I think plenty of people would enjoy. If you have the opportunity, try one out and see what it can do for you.

When publishing a link post yesterday about blogging feeling more away from regular social media, …

For reasons that I don’t really want to go into, I’ve had to resort to sleeping tablets. Nothing …